So, top mounted or front mounted intercooler? If you’ve worked on vehicles you will know, there’s rarely a simple answer (or fix) to anything let alone this hot topic. This topic is even more loaded in the off-road 4x4 world, where there are a wider variety of issues to consider than on the road and racetrack. 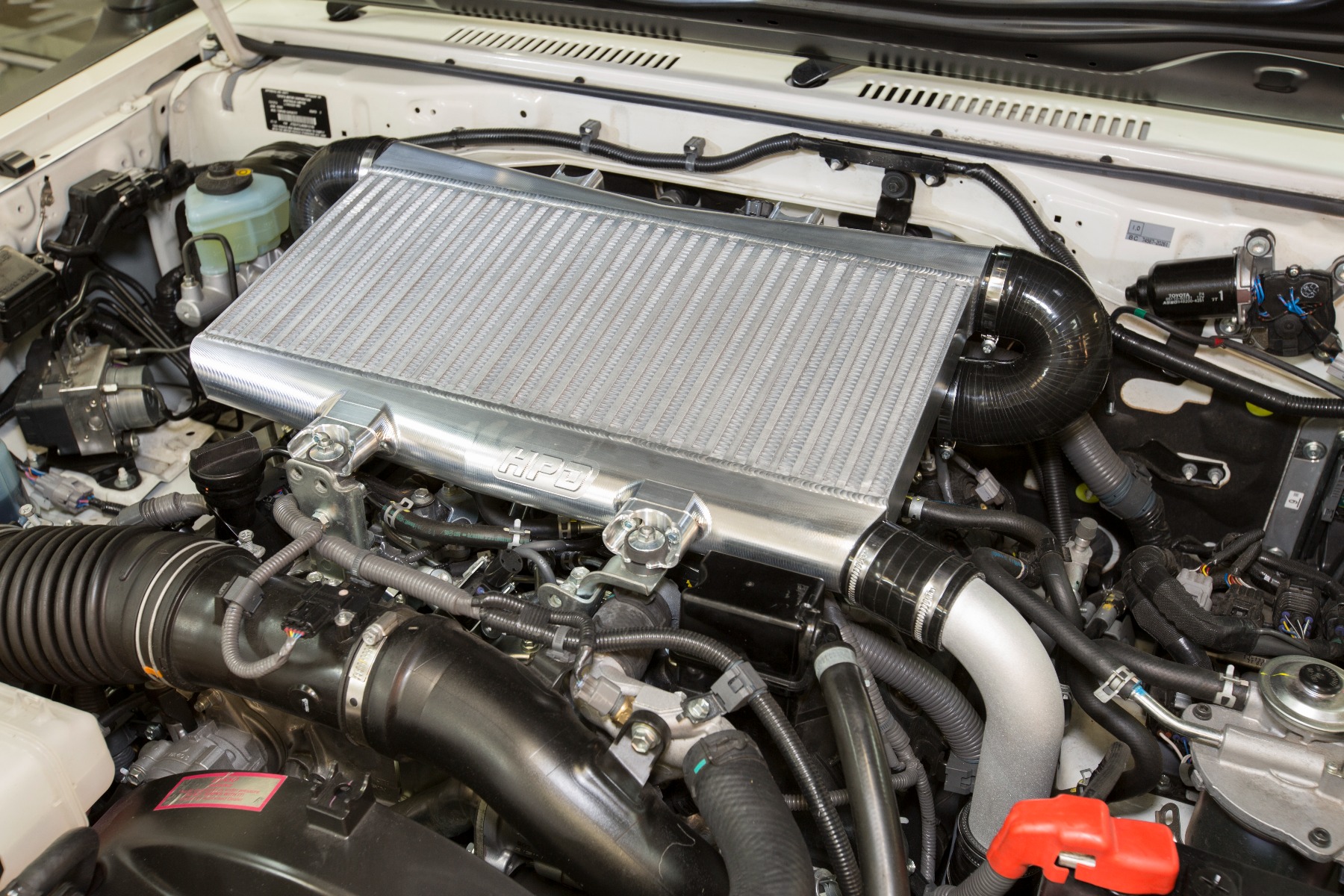 Need to win the space race?

TMIC systems are generally used for packaging reasons, where space may be limited in front of the engine. Easy to install, they are positioned well out of the way of most obstacles when off-road driving such as rocks as well as airborne debris. When trudging through muddy trails and water crossings, they are unlikely to get clogged with mud and lose efficiency.

Waiting for a quick response

With the intercooler fitted close to the intake system, much less pipe work is required, with less joins that can leak and shake loose. This generally means (with the correct diameter tubing) better throttle response and less turbo lag due to the short distance the charged air needs to travel. However in most diesel applications this is less noticeable given the low-down torque compared to petrol engine torque curves.

The location of TMIC’s don’t obstruct vital airflow to important heat exchangers at the front of the vehicle like radiators, air conditioning condensers and other ancillary cooling parts like oil coolers.

TMIC’s are in turn unaffected by obstructed airflow by additional lights and winches fitted to the front of the vehicle. Unless of course these are added and air flow paths not considered; for example - light bars directly in the path of bonnet scoop.

For a part that’s primary purpose is to provide cooling, putting it above a hot motor at the top of a hot engine bay is not ideal. Prone to heat soak, bonnet scoops and electric fans are required to increase efficiency at lower road speeds or off-roading. Although they look tough, bonnet scoops in some cases don’t allow as much airflow to the intercooler (due to visibility and regulatory reasons) as the grille or air intakes at the front of a vehicle. Consider the other accessories on the front of your car to determine this factor.

Generally, the bigger the intercooler core, the better the cooling performance. TMIC cores, due to the size constraints of being crammed in between the top of the engine and the bonnet, can’t be as large as some front mounted intercooler cores, in both frontal area and core thickness. However this isn’t always true, you can quickly ascertain the core differences with a simple formula, we actually have larger TMIC choices in some cases.

Get to know your fans 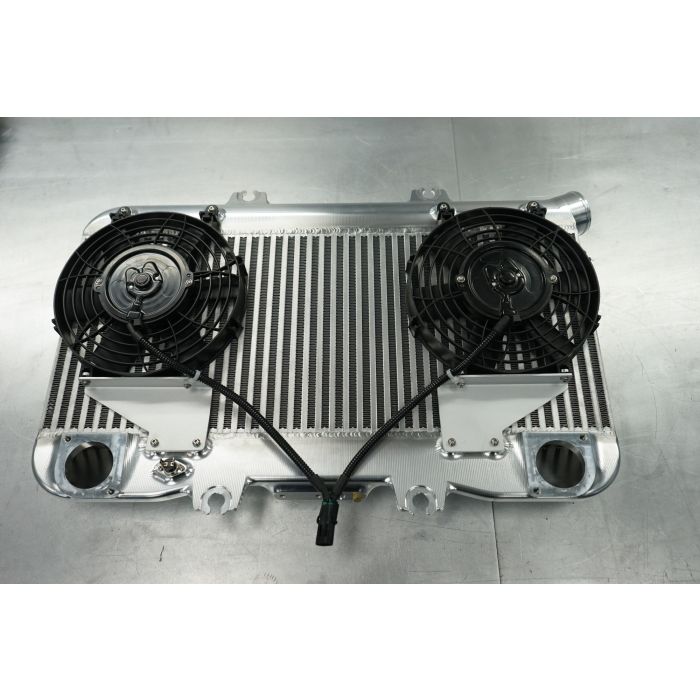 As touched on earlier, due to compromises in packaging and heat exposure, to achieve the optimal cooling performance from TMIC’s an electric fan is recommended. With space already at a premium, your fan choice needs to be compact as well as high performing; we use an Australian made quality unit.

During difficult off-road driving at crawling speeds, a high-performance thermo fan is a must to draw cooler ambient air from the bonnet scoop, through the intercooler core to reduce charge air temperatures more effectively. 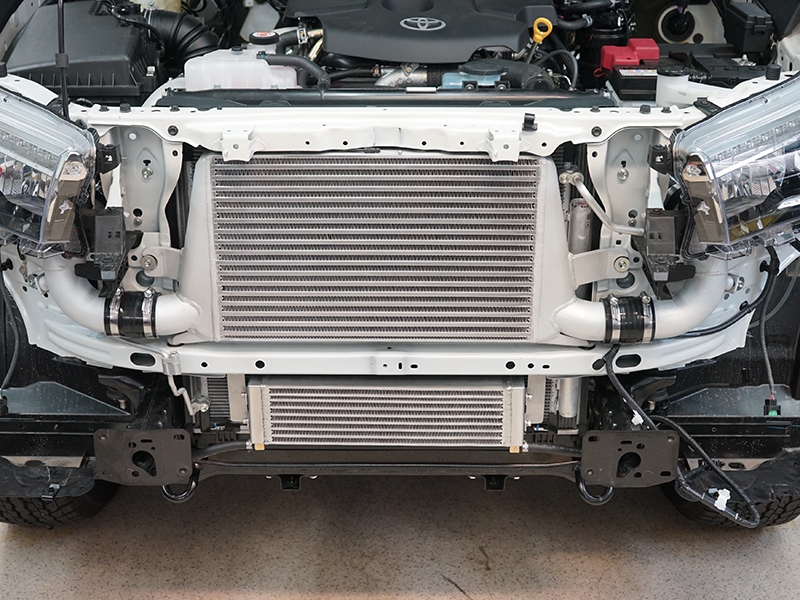 No Cooler Place to Be

Enjoy the wind in your face? Intercoolers do. There is nowhere better for a heat exchanger to be than right up front where there’s a steady flow of cooler ambient air. Not only is there plenty of air flow (in most situations), there’s also more freedom to create extra space to fit large intercoolers with significant frontal area and core thickness for optimal cooling.

Having your intercooler mounted up front and away from much of the engine bay’s heat also provides the benefit of less heat soak compared to a top mounted intercooler, even at low speeds.

For low airflow situations during slow, challenging off-road driving, bigger cores can accommodate bigger thermo fans with larger diameters and thicknesses, drawing plenty of cooler air from outside the vehicle, through the intercooler core.

What Could Possibly Go Wrong?

Not many will argue the fact that utilising FMIC’s are the most effective way to reduce charge air temps in most instances. However, here are the issues to be aware of with this configuration.

The location of accessories such as lights and winches need to be considered, as they can obstruct airflow to FMIC’s.

As it’s fitted further from the turbo and intake manifold, extra pipes and joins are required to route the charged air. This creates an increased chance of failure points developing where boost pressure can be suddenly lost, especially after many rough journeys.

FMIC systems are generally not as simple to fit as TMIC, sometimes requiring significant modifications to accommodate large intercoolers and route pipework. Extra piping length can also slow throttle response and increase turbo lag, but again in the diesel world this is minimal.

It’s location at the front of the vehicle reduces air flow to other heat exchangers such as the radiator and air conditioning condenser. In some makes & models this is a critical point to consider as they may have a reputation of inadequate cooling systems.

If this alone is making you reluctant to consider a front mounted system, consider the fact that making a significant reduction in charge air temperature, will reduce engine temperatures somewhat, which in turn means the radiator/cooling system has less work to do. However, this point is more relevant in the case of intercooled versus not intercooled.

Being at the leading edge of the car also places it at higher risk of impact damage from debris and wildlife than TMIC’s. They are more prone to clogging from mud, plants and seeds, reducing their efficiency and requiring cleaning. 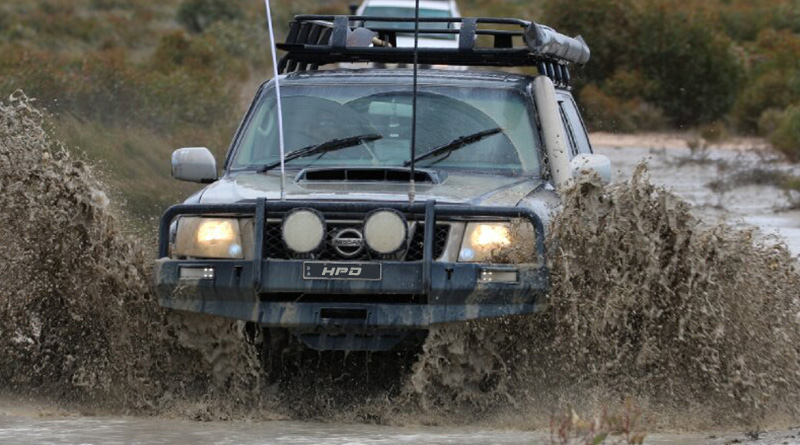 Impact protection should be considered to FMIC components and placed in protected areas of the vehicle. In the event the system sustains damage or piping becomes disconnected, water can enter and get sucked into the intake manifold, leading to engine failure. Diesels are more susceptible to this as they can continue to run with less symptoms after an air leak as compared to a petrol vehicle which often becomes immediately undrivable.

So, which is better, TMIC or FMIC? The answer really depends on what you are going to use your 4x4 vehicle for. Most 4x4 vehicles do the majority of their work on public roads, touring on highways, major dirt roads and beaches, with the occasional slow-speed off-road work. For these applications, a front mounted system will provide the best way to keep intake temperatures down.

For vehicles that spend plenty of time crawling through remote, rugged outback tracks with regular water crossings, bog holes or ruts, a top mounted intercooler system might be the one to consider.

The points above are of course heavy generalisations, and there really isn’t a wrong answer. HPD have TMIC and FMIC kits available, but not every model has a choice of both. One thing’s for sure; no matter which HPD intercooler kit you choose, it will provide better intake temperature reductions than an OE system and they are designed and tested for maximum durability and ease of installation. 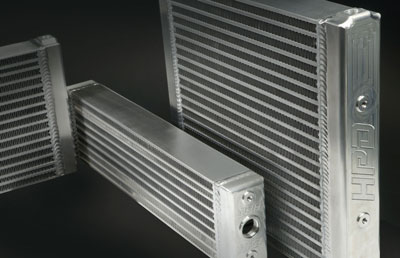 NEXT →
The Truth About Fake HPD Parts